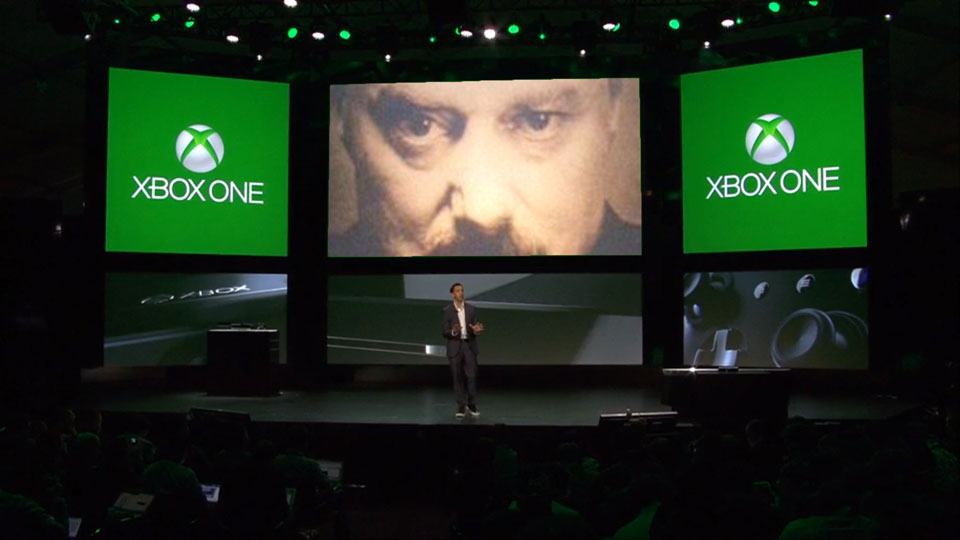 As a casual gamer and lover of all things tech, I am super excited about the new Xbox One that Microsoft just unveiled! It has this nifty gen 2 Kinect sensor that is sensitive enough to measure a heartbeat, with a 1080p video camera built right in for instant two-way communication. It’s designed to be constantly connected to the internet, and it tracks and analyzes everything you watch and play to deliver an even more customized entertainment experience!

It…wait, what? Who are you?

George: I’m George Orwell, celebrated author of the great dystopian masterpiece Ninteen Eighty Four. I’m afraid Microsoft is is about 29 years late with their grand vision of a unified all-in-one home entertainment and communication device. Actually, my book was published in 1949, so if you want to get technical about it…

Me: Man, it’s been a while since I’ve read dystopian fiction.

George: …64 years late. Am I prescient or what?

Me: Ok, leaving aside the obvious question of why you’re co-authoring my blog post, what does your super depressing book have to do with gaming? Weren’t you writing about oppressive totalitarian regimes like Soviet Russia?

George: Congratulations, you paid attention in school. While I certainly had the Communist Party in mind, one of the main themes of the book is the pervasive use of surveillance. I was illustrating the dangers of how government could use technology to monitor and control its own citizens.

Me: Yeah, but get real. Microsoft isn’t the government, it is a private company! All they want to do is sell more consoles, games, Xbox Live subscriptions, and Microsoft Points. Sure, I’m a little creeped out by the lack of privacy these days, but the flip side is that all this amazing technology allows me to do things that your generation never dreamed of. It genuinely makes my life better, easier and more enjoyable. Well, most of the time. Plus, my government doesn’t care how much Netflix I watch anyway, they’re too busy fighting about the debt ceiling or some such. Obama seems pretty chill, would he care about keeping an eye on me or anyone else?

George: You are expecting your government not to do what governments ALWAYS tend to do: gradually expand their authority and control over their citizens, under the guise of Keeping You Safe. Everyone wants to be safe, right?

See, in my book, the fictional country of Oceania was always at war against an external threat. It didn’t really matter who or what the threat was, the point is that the perpetual war served as a useful tool for keeping people afraid, and willing to accept the most intrusive kinds of surveillance and control in order to feel safe. Do you know of any wars declared against vague and amorphous enemies that never seem to end? Have there been any recent intrusions of privacy in order to fight that war?

George: Your government officials aren’t quite as ‘chill’ as they seem. The last president seemed pretty chill too, until some buildings in New York got blowed up.

Me: Wait a sec. There’s no way our government, or any government, could monitor all of its citizens all the time in this day and age. There are so many different communication channels, with cellphones, skype, VoIP, texting, etc, doesn’t that just create an unmanageable volume of data to even store, let alone sift through? Not even Google can do that.

George: You’d think so, but remember the Boston bombing? Former FBI counter-terrorism agent Tim Clemente was being interviewed on CNN about whether we could know what the suspects said to each other on the phone, and he basically let slip that the contents of all cellphone conversations are being recorded. Where could they possibly store all these recorded conversations, you ask? Well, how about the Utah Data Center. What exactly does the US Intelligence Community need with a top-secret data center that can store yottabytes of data?

George: The big question is, what if the Microsofts and Googles of the world are inadvertently  helping to create the surveillance tools that will allow future government to monitor and control the private lives of its citizens, all in the name of ad revenue, customer data, and Microsoft Points?

Me: Screw this noise. My brain can’t take it anymore. I’m going to go watch reruns of Big Brother for a while.

George: I didn’t realize there were reruns of reality shows. The future is weird.

I'm passionate about creating great customer experiences. Check out the Consulting page to learn more. Want to talk to me? Give me a call at (605) 622-0789 or Send me an email.

I'm a web architect, designer, and consultant living in Aberdeen, South Dakota. I am interested in the intersection of technology, design, faith, culture, and community.