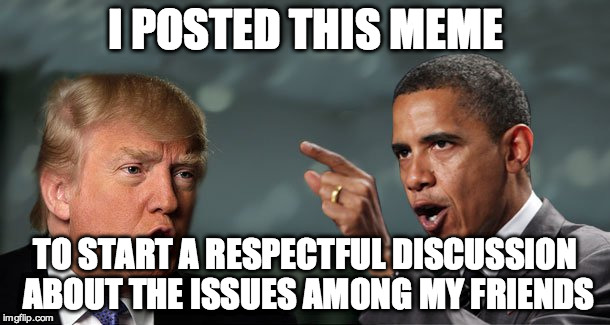 Once upon a time, Sam saw an article on social media about an issue he cared about. To make sure he fully understood the issue, Sam read multiple articles from different sources and perspectives. Then Sam posted a meme on social media which cleverly presented his thoughtful and nuanced views.

All of his friends were impressed by his deep understanding of the subject, and began engaging in meaningful and respectful conversations with each other. They also shared it with their friends, and it became a trending topic. It hit the front page of Reddit, then Fox and CNN picked it up.

Due to the widespread coverage, Americans began a broad dialog which led to a clear solution that the vast majority of citizens agreed with. Both parties in congress came together to pass legislation, the President signed it, and the world marveled at how our country rallied to address such a complex issue. Other nations began following our example, and before long the whole planet was being transformed by a renewed sense of love and respect for one another.

And we all lived happily ever after.

I'm passionate about creating great customer experiences. Check out the Consulting page to learn more. Want to talk to me? Give me a call at (605) 622-0789 or Send me an email.

I'm a web architect, designer, and consultant living in Aberdeen, South Dakota. I am interested in the intersection of technology, design, faith, culture, and community.